It will probably be the biggest scene party in Poland this year.

"RetroKomp" - a retro-computer meeting (since 2012) comes back again together with "LOAD ERROR" demo-scene party, to provide you a 100% real-hardware experience and fun, the way it was during so-called "good, old days". No PCs (sorry), no LAN, no emulators, no modern consoles - only the real stuff!

"RetroKomp" usually provides lectures, game tournaments, demo-shows, scene and retro-gamedev celebrity meetings. There is also a "RetroKomp Game Development Compo" - the final of a new-game development competition for any retro-platform you wish.

In 2015, "LOAD ERROR" demo-scene party takes the lead as the main event, with scene live-acts and major demo-scene compos for all 8-bit platforms and Amiga (all run from the real things, no PCs again).

As this is going to be the 1st Amiga demo compo in Poland since 2003, apart from a regular compo prizes - all serious Amiga intro (40K/64K) or demo entries will be rewarded with an original Zubrowka 0.5l bottle. By "serious" we mean no fake/fun neither compo-fillers (these will be moved to Wild/Crazy Compo). Remote entries are also very welcome, but to receive the reward (tasty Zubrowka!), you have to be present during the demo compo.

If you are serious about demo-scene and the real hardware - don't miss this one. There you will find an 80-90s atmosphere, scene & retro-computer oriented people and a very affordable and good polish beer!

How to get there?

Gdansk is the biggest city in the northern Poland (former host of Euro 2012 group games) so it's pretty well accessible. Cheap flights from northern and central Europe, direct trains from Prague or Berlin, ferries from Denmark and Sweden.

All the details will be available asap (April?) on our web page (English version under development). 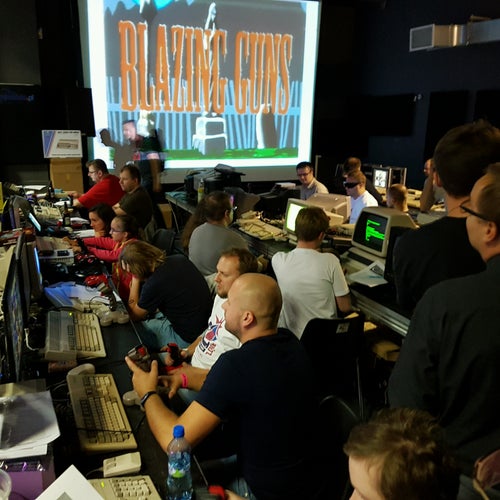